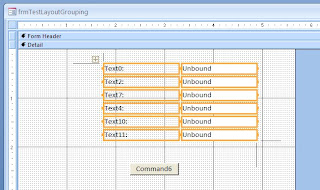 Hi. This is intended to be a blog where I post up some musings, code and or examples of what I'm working on or what I've discovered about Microsoft Access. I'm an Access developer who finds himself digging deep under the hood of Access at times, and sometimes I find something interesting to share with the Access developer community. We'll see how this goes. I've tried blogging before and it just seems to be hard to keep up with. Please bear with any large gaps between posts.